I haven’t had any appointments lately since Horizakura has been traveling.  However, I did have the opportunity to go to Rome for work last week.  During that trip, I happened upon a very non-Italian art exhibit.  While I doubtlessly should have been trying to get into museums to see the works of Bernini, I saw a subway advertisement that informed me of a Hiroshige exhibit nearby.  Despite the fact that the collection is typically housed in Boston (a mere 4 hours from my home), I wasn’t sure when I would next have the opportunity to see it.  It’s a great exhibit with an extensive collection of his works.  They allow photographs, so I thought I would share a few of Hiroshige’s prints that most directly relate to Japanese tattoo in their subject matter.  It’s well known that Japanese tattoo has its roots in Ukiyo-e prints, but seeing some of that influence first hand was a treat.  I have also included a humorous print that depicts a battle between Sake and Rice as well as a poem that specifically relates to the content of my tattoo.  Check it out! 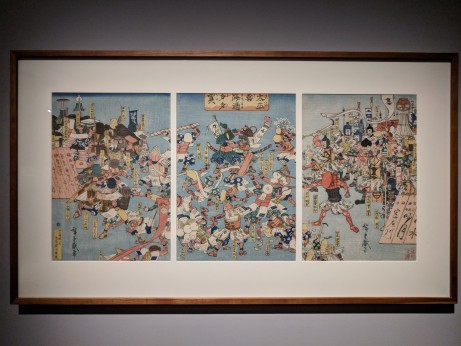