Attend the tale of my 62nd appointment with Horizakura!  This was a brief one hour outline session during which he drew on and outlined some background elements around the koi that was tattooed two weeks ago.  Despite his tattooing me in nearly identical locations as last appointment, I was noticeably more twitchy this time.  I cannot explain why.  I felt really great after the last appointment, but this brief jaunt down my thigh and the back of my knee was not great.  The human body is a mystery.

Looks like we will have one more appointment in two weeks to connect some of the background on my left and right thighs.  The goal (I think) is to achieve that typical “V” pattern that you often see in the armpit area of sleeves.  I’m not at all looking forward to the position I’ll be in for him to tattoo me there or the compromising, unsightly photos that I will have to take of the results.

Here are some awkward photos to prepare you for that: 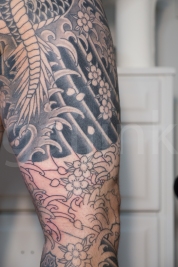 For my 61st appointment,  Horizakura outlined a new koi on my right thigh and began the process of outlining background and connecting the leg to my backpiece.  I’m pretty sure I’ve said this before, but I really get spoiled by the silence of tebori.  It’s so much more meditative and soothing than the machine is.  That said, I do enjoy how much gets done in our usual two hour session.  Feels good man.

We grabbed a couple beers after the appointment and while I was telling a story about my last trip to Japan, it sparked a whole new idea for my torso tattoo.  I feel like I’ve already spilled so many ideas for what we were going to do there and it keeps changing, so for now I’m going to keep it secret until we know for sure that this is what we’re doing.  It’s different than what I thought would go on my torso… but it’s also a really cool idea that ties to a personal experience and still fits with the overall suit.  My next appointment will be the back of my knee connecting to the backpiece and the following appointment could very well be the start of my torso.  I hoped to lose a little weight before I had to start posting pictures of my gut here, but that ship has sailed.  I’d rather be fat and tattooed than skinny and not tattooed. 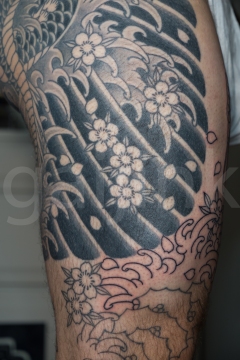